Best places to visit in Antwerp 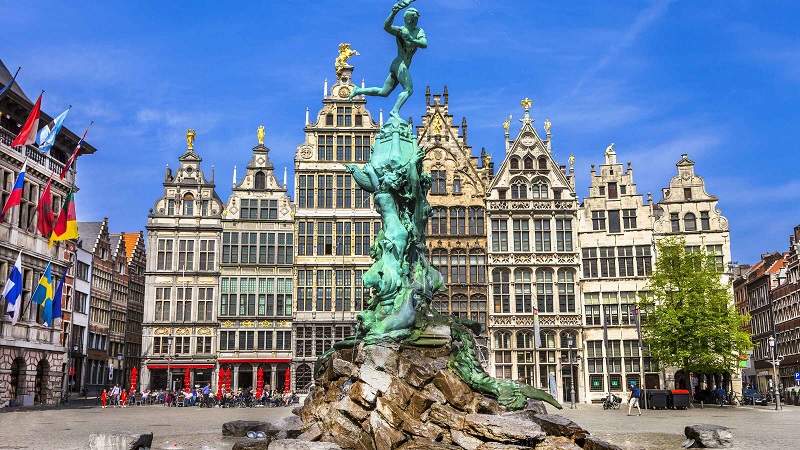 Posted at 14:50h in Reviews by administrator 0 Comments
0 Likes

For the amount of Rubens works alone, Belgium’s most populous city is well worth a visit. But that is only one of the reasons. Did you know that, in the 16th century, the taxes collected by the Spanish crown in its port were equal to the income from the silver mines of Potosí? In addition to paying taxes, Merchants also built palaces and commissioned works of art to decorate them. Of course, there is also a market square, a Stadhuis, a cathedral … Come on, and there is no shortage of places to visit in Antwerp.

Places to visit in Antwerp

But don’t believe that Antwerp is in the past. That port is now the second in Europe for cargo transported and you will find a good number of contemporary buildings, one of the most beautiful in the same port. Not to mention the city’s museums, from the most classic to the most modern and curious.

THE MARKET SQUARE: THE FIRST THING TO SEE IN ANTWERP

There is no flamenco city worth its salt that does not have a most spectacular market square and its largest city was not going to be the exception. So the first thing you have to see in Antwerp is its Grote Markt. Of course, unlike the rest of the Flemish squares, the city ​​hall building, Stadhuis, in Antwerp is not in the flamboyant Gothic style. The initial project expected it to be, but the delay in the works caused the design to be updated following the style of the time: the Renaissance. You will have to settle for seeing it from the outside unless you book a visit in advance.

In front of the town hall, you will see the statue of Silvio Brabo. And who was Silvio Brabo? A Roman centurion, Rome also reached these latitudes. Legend has it that a giant charged a toll on all ships that ploughed the Scheldt River. Silvio Brabo got “fed up” with this situation and fought against the giant. Obviously, Silvio won and, after cutting off his hand, he threw it into the river. That gesture is what the statue reproduces.

THE CATHEDRAL OF OUR LADY, RUBENS IN ITS PUREST FORM

The Antwerp Cathedral -officially Onze Lieve Vrouwekathedraal, Cathedral of Our Lady does not go unnoticed. With its size, 123 meters long and no less than 7 naves, it is the largest church in the Benelux-Belgium, the Netherlands and Luxembourg. But, beyond its size, the main reason to enter is that inside you will find four canvases by Rubens: the Assumption of the Virgin, the Raising from the cross, the Descent from the cross – considered one of the Seven Wonders of Belgium – and the Resurrection of Christ. If you are wondering if the church has been turned into a museum, the answer is no. The paintings are in the original place for which they were created.

The most important guilds in the city had their own altars inside the cathedral and used triptychs to decorate them. For a period after the French Revolution, the works were transferred to the Museum of Fine Arts, but returned to their original location.

Beyond the paintings, do not leave the cathedral without approaching the pulpit and looking for the instruments of the different guilds on its ceiling. From a baker’s shovel to arrows of the crossbowmen.

RINCON JUMP WITH ME

A short distance from the cathedral is a narrow alley, Vlaeykensgang. The alley preserves the layout and the houses from the medieval period. It has not preserved the atmosphere – the bad smells, the dirt, the danger. It has become a tourist place with bars, restaurants, and perfectly painted walls.

We have already mentioned this in passing, but you cannot travel to Antwerp without meeting his most famous son: Rubens. Well, not exactly a son, because the painter was born in Siegen, Holy Roman Empire, but his mother was Amberina and spent much of his life in the city.

His fame in life allowed the house in which he lived and whose reform and decoration he directed, has been preserved to this day. We are talking about the Rubenshuis, literally “Rubens house”, another essential place to visit in Antwerp. From its purchase in 1611 until he died in 1640, it was the residence of the painter.

In addition to the rooms, the patio, the study … which already make the house worth a visit due to its age, at the Rubenshuis you will find another ten works by the master. Among them: Self-portrait, Adam and Eve, The Annunciation and Henry IV at the Battle of Ivry. We tell you more about the artist’s biography and the traces he left in the city in our article Rubens in Antwerp.

From the middle Ages and the 17th century, we jump from the late 19th and early 20th centuries to, almost certainly, what will be your first visit to Antwerp. The first, because you will most likely arrive in the city through the doors of the Antwerp train station. A huge iron and stone structure in which one expects to see steam trains arriving at any moment. We have to confess that we couldn’t help but remember Harry Potter and his Hogwarts Express.

On your way to the centre of Antwerp, stroll down Meir Street. It is the most important shopping street in the city. Its name comes from the Meir palace, Paleis op de Meir, a former royal palace that was also Napoleon Bonaparte’s imperial palace, now transformed into a cultural centre and restaurant.

We keep moving forward in time and we come to one of our favourite contemporary architecture buildings: the Antwerp Port Authority building, the work of Zaha Hadid. The port should be part of your tour of Antwerp – we have already mentioned that it is the second in Europe and part of its history – and as you approach it, the construction of Zaha Hadid will catch your eye.

What makes it irresistible is the mixture of an early 19th-century building – a replica of a Hansa building that burned down in the 17th century – with a volume of steel and glass floating above it. It is possible to visit its interior and learn more about the port and its history, with a guided tour. If you want to know more about this building, take a look at our article Zaha Hadid in the port of Antwerp.

You may be thinking that it is about time we talked about Antwerp diamonds. And it is that more than 80% of the rough diamonds of the world go through the Flemish city. Three streets delimit the “Antwerp diamond quarter”: Hoveniersstraat, Schupstraat and Rijfstraat. The truth is that you will not be able to do much tourism, beyond seeing the buildings in which are four of the thirty bags of diamonds that are in the world and a good amount of jewellers.

In one of those stores, like Diamondland, you can take a guided tour and, if you’re lucky, meet one of their carvers – we meet Frank Fabeck there. In others, you can simply hallucinate with the jewels that are exhibited in their showcases. But if you want to know more, your destination is the DIVA, the museum diamonds … and our article on the diamond district of Antwerp.

We are passionate about museums. Although we have already recommended visiting a couple of them –Rubenshuis and DIVA–, the number of museums in Antwerp will “force” you to visit some more. It is very difficult to choose which ones to highlight since we have all loved it.

After travelling to Antwerp several times, we have visited: the Plantin-Moretus Museum –the only one in the world declared a World Heritage Site by UNESCO and to which we have dedicated an article–; the Red Star Line museum of immigration – the point of departure for many of those who came to Ellis Island in New York and to which we have also dedicated an article -; the workshop Panamarenko house -where are preserved until butts artist, also with an article for her; the MAS museum –the other contemporary building that you will see in the port of Antwerp; Vlesshuis – the butchers’ guild house, now a music museum – and the Rockoxhuis.

The choice is based on tastes, although we believe that the essential ones are the Plantin-Moretus Museum and the Rockoxhuis, beyond the Rubens House-museum. If you don’t have much time in the city, we advise you to choose between the Rubenshuis and the Plantin-Moretus.