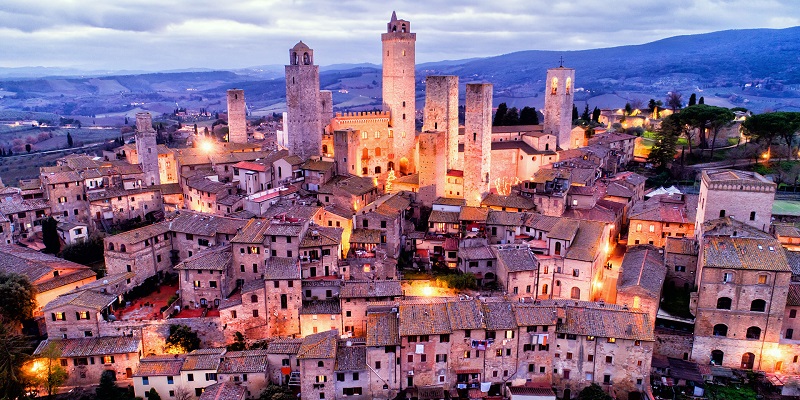 Posted at 14:32h in Reviews by administrator 0 Comments
0 Likes

How many charming towns will there be in Italian Tuscany? Well, a few dozen. Medieval, Etruscan or Renaissance villages, huddled on top of hills or spread out in wide valleys, surrounded by fields of wheat, vineyards or poppies, near Florence, Pisa, Siena or the sea … How to choose then? It is very complicated, but we have tried to make a selection of some of what we believe are among the best towns in Tuscany.

Here is our selection of 9 best towns in Tuscany. In the end, some more, let it be said! And, to see which one is closer to your route, we also put them on a map.

SAN GIMIGNANO: THE MOST “CLASSIC” OF THE TUSCAN VILLAGES

San Gimignano has indeed lost a bit due to the overcrowding of tourism, someone who visited it the first time a quarter of a century ago tells you. But, and it is a very big but, San Gimignano is always San Gimignano. In addition to that, you will be able to see it much calmer, if you do not go on weekends or in high season or if you stay to sleep in the area and visit it early in the morning or late in the afternoon.

One more point in its favor: the famous towers of “medieval Manhattan” make you start to enjoy it before you arrive and continue enjoying it when you leave. The views of that skyline from the winding roads of Tuscany create one of the most classic postcards of the region. So, without a doubt, San Gimignano still deserves a place in the most charming villages of Italian Tuscany. It will be hard to have the podium taken away from him.

VOLTERRA: BETWEEN VAMPIRES AND ETRUSCANS

If you say Volterra to an Italian, he will say “Etruscans”; If you tell someone passionate about the Twilight saga, they will tell you that it is the home of the Volturi –the “royalty” of vampires–; if you tell anyone else … it probably won’t sound like anything. Well, Volterra is one of the most beautiful medieval towns in Tuscany and has a very interesting Etruscan museum. So, whether you like walking through cobbled streets between medieval tower houses or archeology is your thing, Volterra is your place.

Pienza is not only one of the most charming towns in Italian Tuscany. It is the ideal town. It is not that we say it. In the Renaissance, it was modeled to be just that: an ideal small city. In this corner of Tuscany, Renaissance town-planning concepts were put into practice for the first time, in the middle of the 15th century, which has earned it recognition as a World Heritage Site by UNESCO.

Let’s go back to the world of cinema. If the noblest lineage of Twilight vampires had their home in Volterra in Stephenie Meyer’s books, in the cinema, Montepulciano was the town chosen to set New Moon. Well, they keep saying its Volterra… but actually, it’s Montepulciano. Its main square, the Piazza Grande, is Bella crosses getting wet in its fountain. Of course, the fountain does not exist – not even in the “original” square of the book, the piazza dei Priori in Volterra.

San Gimignano, Montepulciano or Pienza are some of the most beautiful towns in Tuscany … but also one of the most visited and, therefore, full of tourists. How about going to someone less known? This is the case of Certaldo, a town near Florence, about 40 kilometers from the Tuscan capital, and which is a perfect stop on the way to San Gimignano.

After Pienza, the most heritage-rich town in the Val d’Orcia, Montalcino, another jewel in this valley, declared a World Heritage Site by UNESCO. Montalcino is famous for its wine in Italy, the Brunello di Montalcino, one of the best known and most awarded countries. But it is much more than its wines. We assure you that it deserves in its own right a place among the most beautiful towns in Italian Tuscany. The medieval wall protects a very well preserved old town, where you cannot miss the medieval palazzo dei Priori. Although the one who will welcome you to Montalcino will be its Rocca, the fourteenth-century fortress converted into the last bulwark of the Republic of Siena in the middle of the sixteenth century its war against Florence.

If you are looking for a beautiful town near Siena, and on the way to Florence, Monteriggioni is your place. Its medieval walls from the thirteenth century – which you can climb – have been preserved almost intact and, okay, it will not be the “medieval Manhattan” that is San Gimignano. Still, fourteen towers, for a walled area of ​​about six hundred meters, there is nothing bad, right?

CASTELLINA IN CHIANTI: A VILLAGE SURROUNDED BY VINEYARDS

We are going to the Chianti Classico area, the “original” area for the production of Chianti wine, already defined in 1716! By the Grand Duke of Tuscany Cosimo III de Medici. We are between Siena and Florence, where many of the most beautiful villages in Tuscany are located, surrounded, of course, by vineyards. Radda in Chianti, with its district of Volpaia – where we ate marvelously at La bottega di Volpaia – or Montefioralle are two of them. Another is Castellina in Chianti. Also, at the top of the hill and surrounded by Chianti Classico vineyards. It has Etruscan origins and one of those 10 medieval historical centers, surrounded by walls from the 15th century, the same time as La Rocca, its castle. But one of its most beautiful and peculiar corners is via Delle Volte –the street of the vaults–, a fully covered medieval alley.