Things to do in Rimini: Best places 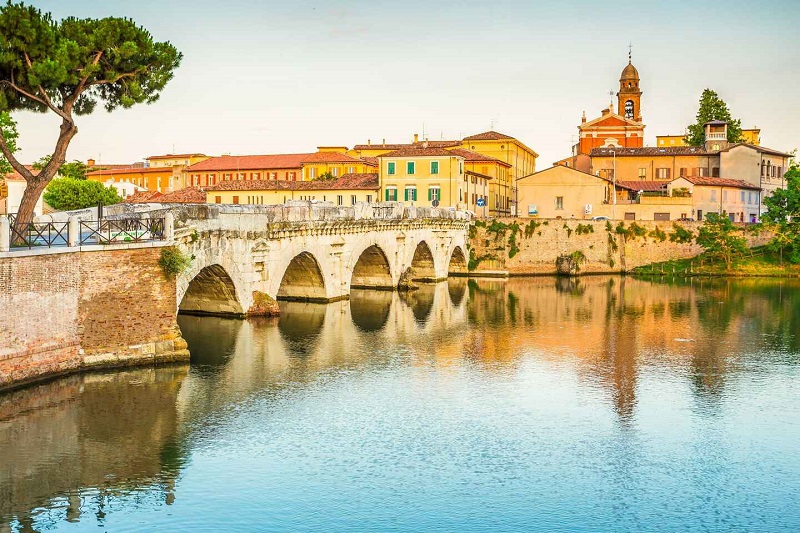 24 Apr Things to do in Rimini: Best places

Posted at 15:02h in Reviews by administrator 0 Comments
0 Likes

If in Italy you say Rimini, everyone will tell you about its great beaches on the Adriatic Riviera 15 km of beaches no less! and its party. If you are from my fifth, you will remember those great clubs that in the ’80s and’ 90s were the center of the Italian macro party. Many foreign tourists who know it also do so for its beaches, if they come from northern Europe, or because they have passed through here on their way to the small Republic of San Marino.

But Rimini is much more than that: it is a city with millenary history, full of Roman, medieval and Renaissance monuments and with a surprisingly quiet old town that invites you to stop for a piadina or an ice cream. So we are not going to talk to you about its beaches. We take you by the hand through that historic center and through the things to do in Rimini.

Things to do in Rimini

The most iconic monument in Rimini is its cathedral. So far, nothing weird. What is unusual is the appearance of that cathedral, not to mention its name. Let’s start with the appearance: despite being a Renaissance church, from the 15th century, on the outside, it is rather reminiscent of a classical temple. Hence it is known as a temple. But it is that, also, few know to whom it is dedicated, San Francisco. In short, what should be called the Cathedral of San Francisco is known to all as the Malatestian Temple. And it is not for any saint, but for the one who had it built: the greatest of the lords of Rimini, Sigismondo Malatesta. To give you an idea of ​​the importance of the Renaissance gentlemen in Italy.

THE ARCH OF AUGUSTUS: WELCOME TO THE ROMAN CITY

The other monument that you have to visit in Rimini, yes or yes, we have already mentioned it: the Arch of Augustus. A great triumphal arch dedicated to the first Roman emperor and raised after the restoration of Via Flaminia by Augustus himself. The Via Flaminia linked Rome with the Roman Rimini Ariminum and intersected with another great road: the Via Emilia.

As a good Roman arch to be respected, the decoration includes gods and symbols that recall the emperor’s greatness. Of Rome, the two heads of oxen on the two faces of the arch symbolize the quality of the Roman colony of Ariminum. Of course, the battlements were added in the Middle Ages. It seems that a large chariot led by Augustus initially crowned the arch.

THE DOMUS OF THE SURGEON: A LITTLE MORE THAN ANCIENT ROME

In 1989, the works in a central square in Rimini brought to light another Roman jewel: a Domus that archaeologists would call Domus del Chirurgo, of the surgeon. Why the surgeon? Well, because among his remains were found many surgical instruments, about 150, no less! and a series of bottles with medicines that leave no doubt about the house owner’s profession.

The domus is from the 2nd century and was destroyed by fire in the middle of the 3rd century, probably in the wake of a barbarian horde. Many objects and decorations have been preserved among the rubble that the owner could not save at the time. Among them, that surgeon-pharmacist team, the richest that has come down to us since ancient times and kept in the Museo della Città. It is even known that the surgeon was of oriental origin, probably Greek, from the texts engraved on two of these medicinal jars and from graphite – the work of a patient – on the wall of the cubiculum where the doctor operated and that is probably his name: Eutyches.

THE TIBERIUS BRIDGE AND OTHER REMAINS OF ROMAN RIMINI

At this point, we think you are clear that Rimini was a Roman city. Well, its historic center is full of remains and memories of that time. Suppose there is a third Roman monument that you have to see in Rimini. In that case, the Tiberius Bridge, the bridge over the Marecchia River ordered to be built by Augustus and finished by his successor Tiberius in AD 21. Do not miss its view from Piazza sull’Acqua do not forget to walk the walkways next to the river.

Of course, there are more remains of the time. One is the Porta Montanara, one of the access gates to the city, from the 1st century. And the other is the Roman amphitheater, well, its remains. Not much remains of it, but back in the second century, when Emperor Hadrian had it built, it had an arena almost as large as that of the Colosseum in Rome.