What to see in Albi France? 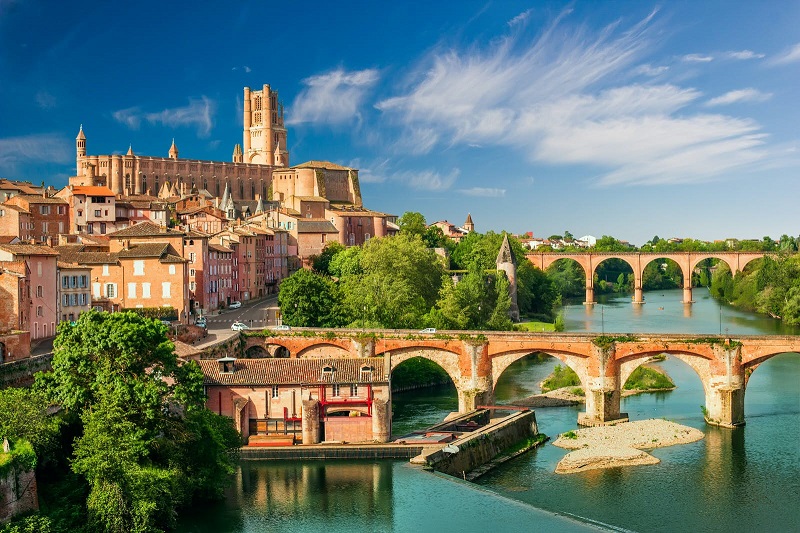 24 Apr What to see in Albi France?

Posted at 15:07h in Adventure by administrator 0 Comments
0 Likes

Albi has many reasons to be proud of herself. A historic center declared a World Heritage Site by UNESCO, the largest brick cathedral in the world. The museum with the largest collection of works by Toulouse-Lautrec on the planet, its beautiful views over the River Tarn. Yes, despite its small size, there is much to see in Albi. Are you accompanying us through the red city of France? Let’s see what to see in Albi France?

What to see in Albi France?

We take you to the episcopal city where the Church faced the Cathar heresy with the so-called “Albigensian crusade” Yes, that’s where the name comes from and where, six centuries later, one of the greatest Post-Impressionist painters, Henri de Toulouse, was born- Lautrec. A city with warm tones that, depending on the time of day and year, varies between red, pink, and ocher. Why? The most typical construction material in the area: brick. That brick has given her the nickname of Ville Rouge red city- or Dame de Brique brick lady.

As soon as we got to the historic center of Albi, we realized that our rented car was the most out of tune through those medieval streets. It was time to “hide” it in an underground parking lot and walk through those alleys.

THE CATHEDRAL OF SANTA CECILIA, THE FIRST THING TO SEE IN ALBI

We are very clear that it is the first thing to see in Albi: the Cathedral of Santa Cecilia. As with the churches and palaces of the Occitan capital – we will tell you about it in our article with the places to visit in Toulouse – the Albi cathedral is also built-in brick. There were no quarries in this area, but there was a skill in making bricks made with earth taken directly from the Tarn River. And for the cathedral, they had to make a few: it is the largest brick cathedral in the world – not a church that of St. Mary of Gdańsk surpasses it. Without a doubt, it is imposing for a while, and not only because of its size but because of its appearance of strength.

The medieval fortified churches – the cathedral was built between the 13th and 15th centuries – were typical of this area of ​​”Cathar heretics” to whom the Church’s strength had to be demonstrated. Of course, in the interior, there is no longer any sober military architecture that is worth it.

THE INTERIOR OF THE ALBI CATHEDRAL

The striking Gothic portal already gives an idea of ​​what you will find inside. Still, it is when you set foot in the Church that you will discover that there, the symbol of the fight against the Cathar heresy – which preached the poverty of the clergy – is no longer strength but ostentation. All art: not a square inch is left unpainted. With its blue background, the vault reminded us of the great hall of Harry Potter’s school, Hogwarts, with its enchanted ceiling showing the sky. Of course, there is no magic trick here, “only” fresco painting.

When we were told that these frescoes were from the same period as those in the Vatican’s Sistine Chapel but that they had hardly been restored, we could not believe it. The explanation is “simple”: the loopholes Yes, loopholes, after all, it is a fortress and the porous brick make the air circulate inside the warehouse, and the paintings breathe and stay better. Welcome, be the skill of the 13th-century builders who thought of everything… or luck!

When we say that everything is art, we are not referring only to the frescoes: the pulpit, the organ, the canvases … and above all, the choir and the jubé will make you not know where to look. The jubé is that wall that separates the choir from the retrochoir that looks like a lace fabric.

Between the cathedral and the river, Tarn stands the other great medieval building that you have to visit in Albi, yes or yes: the Palais de la Berbie. It is from the same period as the cathedral – 13th-15th centuries – and, again, it has this objective of “demonstrating the strength of the Church.” In this case, the force of the highest ecclesiastical authority in Albi was the episcopal palace – barbie means bishop in Occitan.

Despite being called a palace, it is a great fortress. The French gardens in the old parade ground, which we saw above, overlook the River Tarn and are the only “delicate” part of the construction they were added later. You will be welcomed to the palace by its defensive walls and towers: they didn’t hang out with little girls in the thirteenth century.

As with the cathedral, the interior of the Palais de la Berbie is something else. There, not only narrow and dark medieval corridors await you, but also varnished terracotta floors. The one in the Inquisition room, large halls with vaulted ceilings or wooden coffered ceilings, is a Renaissance gallery. A Gothic chapel with Baroque decoration … And it is that, until the French Revolution, the bishops of Albi converted into archbishops at the end of the seventeenth century continued to be the great lords of the city. But, above all, the Toulouse-Lautrec museum awaits you, another great essential.