What to see in Rouen? Best tourist attractions in the Rouen 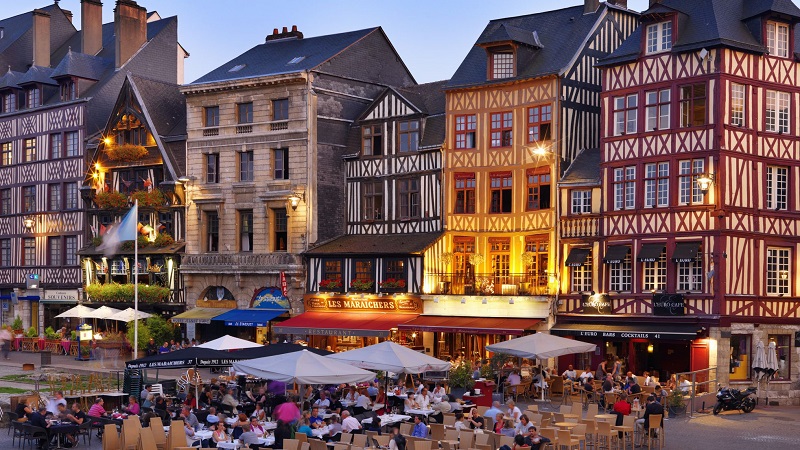 24 Apr What to see in Rouen? Best tourist attractions in the Rouen

Posted at 15:11h in Reviews by administrator 0 Comments
0 Likes

The capital of Normandy, Rouen, has everything you could ask for in a city in northern France. Medieval alleys, noble stone palaces and half-timbered houses, Gothic churches with large windows, museums and even contemporary buildings that do not clash with the rest. So that the wonder doesn’t overwhelm you, here there’s our selection of places: what to see in Rouen. And even a different route around the city if you have a little more time.

What to see in Rouen?

The places are dotted with some historical curiosities and the Norman capital has a very intense history. Among the many events that took place here is the execution of Joan of Arc. Yes, in Rouen, in May 1431, the English seized her in the castle tower, tried her, declared her heretical, and burned her. You will find a few memories of the French heroine through the streets of the historic center.

We will not get dizzy anymore, here are our essential places to visit in Rouen and its surroundings and at the end a map to make it easier for you to find them.

THE CATHEDRAL: THE FIRST THING TO SEE IN ROUEN

The Cathedral of Notre-Dame de Rouen could be ideal for a history test of art place. Only on the main facade, you already have the Romanesque style of the two side doors 12th century and the Renaissance style of the central one 16th century. And what about the towers? That of Saint-Romain –to the left– has Romanesque, Gothic and Gothic-flamboyant parts. And the one in Le Beurre –tower de la Mantequilla, the one on the right– is Renaissance.

Not to mention the great cast iron neo-Gothic spire from the 19th century. It replaces the Renaissance wooden one struck by lightning, which replaced the 13th century Gothic that burned in a fire. These are just a few examples, and it is that the history of the Rouen Cathedral has not been very quiet, between natural disasters, revolutions and wars, including World War II, when it was bombed.

MONET AND THE ROUEN CATHEDRAL

There are a few curiosities about the main facade of Rouen Cathedral: for example, that it has the width record in France, with its more than 60 meters, or that it is known as “the most human of cathedrals,” due to its lack of symmetry. Although the best known is that, in the ’80s’80s of the 19th century, she was portrayed by Monet in no less than 28 paintings! In two others, the painter portrayed the Cour d’Albaned’Albane – the cloister garden – so, in total, there are 30 paintings by Monet of Rouen Cathedral. One of the houses from which he painted them is where today the tourist office is located.

All the pictures are different. It is known how the Impressionist painter liked light: he portrayed Rouen Cathedral throughout the year and at different times, giving each painting different touches of color. Now the works are scattered around the world, although the most are in the Musée d’Orsayd’Orsay in Paris: five. Anyway, without leaving Rouen, you can see one in the Museum of Fine Arts.

RUE SAINT-ROMAIN AND ITS HALF-TIMBERED HOUSES

Do not forget to surround the cathedral. First, to see its 13th-century side doors: La Calende and Los Libreros. You will find the latter at the end of a gothic “corridor.”

And then to take a look at some of the oldest streets and houses in the old town of Rouen. In particular, don’t miss the Rue Saint-Romain, which gives access to the Door of the Booksellers, with its half-timbered houses from the 16th-17th centuries. Its small intersection, the Rue des Chanoines, is also very curious.

THE RUE DU GROS HORLOGE AND THE GREAT CLOCK

You will not miss one street is the Rue du Gros Horloge, the street of the Great Clock. It is the main one in the historic center of Rouen and, as a curious fact, pedestrianized since 1973: the first in France. Many of its buildings are half-timbered and sloping – the oldest, from the 14th century – in the purest northern French style. Why is it called Calle del Gran Reloj? Well, because it connects the cathedral with … surprise, surprise, the Great Clock, the other icon of Rouen.

If you have a little time, we advise you to visit the Gros-Horloge. In the Gothic bell tower, the mechanism of the original clock is preserved: a marvel of 14th-century mechanics that is still in operation. Of course, since 1928 with electricity. You will see it up close and, thanks to the audio guide, you will find out what its allegorical figures represent days and lunar phases. You will learn more about the history of Rouen and discover curiosities such as that from 1389 to 1970, there were 25 guardians of the tower. Not to mention its rooms with Renaissance decoration, its medieval bells and the views over the historic center of Rouen.

THE OLD MARKET SQUARE AND THE CHURCH OF JOAN OF ARC

If you had to choose only three places to see in Rouen, they would have to be the cathedral, the Great Clock and the Old Market square Place du Vieux-Marché, where the church of Joan of Arc is located.

There is a curious mix in the square: old half-timbered houses coexist with contemporary buildings erected in 1979 when the square was renovated. The main one is the Church of Joan of Arc, whose roof, as a tribute to Norman tradition, is shaped like the keel of an overturned ship. The mixture of old and modern continues inside: the stained glass windows behind the altar are Renaissance, from the 16th century. They belonged to the church of St-Vincent, bombed in 1944.